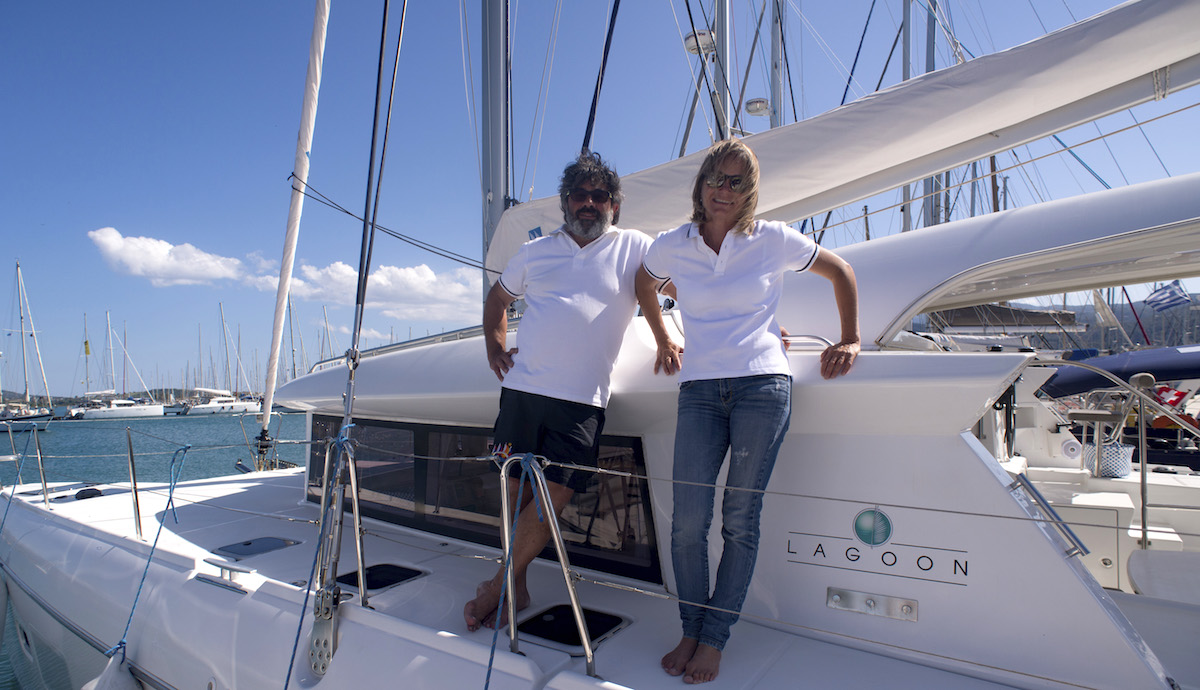 The passion for sailing transformed into a profession.

In the year 2006 we decided to expand our business which until then was one boat, a Gran Soleil 48 launched in 1996 and with which we worked, with boarding the cabin as skipper and hostess. We have bought the first charter sailboat and opened our charter company in Greece, now we have a discrete fleet of sailing boats and 2 charter catamarans with or without skipper, based in Lefkada, in Ionian Greece. We personally do the maintenance of the boats that catamarans, naturally availing of the help of qualified personnel. In the winter months we have 2 sailing boats and a Rib in Marina di Ravenna for daily or weekend rental and to participate in sailing regattas. Since 2008 also nautical school in Imola, Bologna and Forlì. For years we have the help of a staff of trusted people who work with us both in the rental boats with and without skipper, and in the nautical school and without which all this would not have been possible.

Thanks to Denis, Ido, Andrea.

Since 1983 I sail in the Mediterranean, with sailing and motor boats in the Adriatic, Ionian and Tyrrhenian areas covering about 120,000 nautical miles; in 1995, on a boat of mt. 16 sailing, I made my first Atlantic crossing from Martinique to the Azores islands, passing between Sunday, Guadeloupe and Antigua. Since 1987 I have been a pleasure boat operator and since 2007 I have been a shipowner with Romina of our small fleet of professional charter boats. I mainly sail between Croatia, Greece and the Caribbean. I participate in National regattas like the Barcolana and the Winter Championship in Marina di Ravenna, Pesaro Rovigno, Brindisi Corfù. From 1989 to 1994 I worked as a diving instructor with the company Imola Sub. Boat license since 1983 for sailing and motor boats without limits. Title of Expert Velista, obtained in Marina di Ravenna at the Italian Naval League on 10/25/09. Nautical License Instructor Qualification to the conduct of a boat used for the Charter. Enrolled in the register of Gente di Mare of the 1st category, at the Port Authority of Ravenna. Diving escort certificate and A.R.O.

It all started in 2005 ... After meeting with Roberto I set foot for the first time on a sailboat; a year later I got fired from my job, to begin this adventure with him. In 2006, the purchase of our first sailing boat was the legendary Bavaria 30 WHY NOT 5 to start the boat charter business in Ionian Greece in Lefkas. We have always grown up slowly and now we have a small fleet. I take care of the management of reservations and preparation of documents, I follow the cleaning of the boats and also the maintenance, which I like very much. Since 2008 I have a sailing license for sails and motor without limits from the coast. Entered Sea People 1st cat. I made several transfers from Ionian Greece to Marina di Ravenna and back. If necessary, I will soon be a skipper or hostess for weeks. 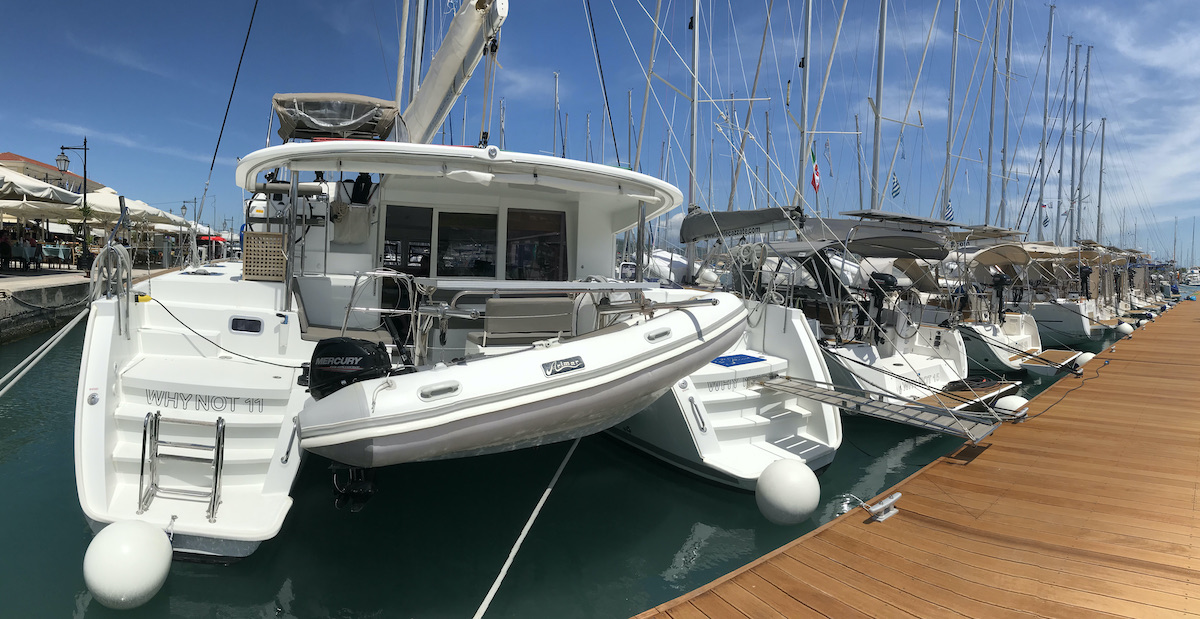 Born in the mountains I first started sliding and then walking, my life has always been an immersion in sport. With a past as an agonist skier I was thrown to the sea thanks to the water skiing activity I did as a summer training first on the lakes and then on the sea. The love for this new element did not take long to arrive and therefore also the desire to discover new scenarios. Taking my first steps as an instructor in nautical centers I learned to know the sea and to respect it. I became an underwater guide but the wind and the waves were my true destiny. I worked on boats of all kinds from small lasers 16 and hobbyists 14 and 16, up to the most prestigious motor yachts. The passion for saltiness led me to move first to Sardinia and then to Greece, where I now work on fast and comfortable sailing boats and catamarans. I sailed all over the Mediterranean with a fascinating interlude of oceanic navigation that made me discover the Atlantic and its most insidious passages such as the Bay of Biscay, Cabo Finisterre, and the famous gates of Hercules. Sailing license / motor without limits from the coast Basic trainer Radar harp Gmdss goc-roc Official student of yachting.

Sailing license and motor without limits from the coast Pleasure boat since 1984 Conductor for pleasure boats used for chartering since 2002 Official Zonal Fiv Regatta Expert sailor Italian Naval League since 2010 Instructor Teaching Nautical License Sporting Director Fiv affiliated company 1997-2006 Director sailing school of affiliated company Fiv 1999-2006 Knowledge of astronomical navigation Knowledge and use of integrated systems of MY Professional experience Owner of Comet 770 sail Owner of Sciarelli 41 sailing Boarded for 30 months with MY Carnevali 130 and subsequently Carnevali160 Collaboration with Property Recovery Agency. Knowledge of Italian ports, Croatian ports, ports of Montenegro, ports of Greece. Navigation at the command for about 200,000 Nm. Constant participation in sailing regattas in the Adriatic. Since 2008, a nautical school teacher at the Avelecazzate offices in Imola and Forli.

I discover the nautical world as a boy thanks to small motor boats, family. The first license, only motor in 1995, I am passionate about the sailing world with the integration "VELA without limits of the coast" in 1999, after which I immediately start an instructor training. Since 2000 sailing instructor, collaborator and then responsible within various schools and UISP associations, with organization of events such as meetings with the greatest Italian navigators and globetrotters, cruises, flotillas, thematic courses, sailing and navigation on small boats (drifts) and cabin cruisers. From 2010 to 2014 collaboration with Il Frangente publishing house aboard the Lycia cutter for monitoring and control of the coasts for the drafting and creation of Mediterranean Books. Sailing, transfers and regattas in the Adriatic and the Tyrrhenian Sea, cruises, flotillas throughout the Mediterranean as Commander and most frequent fleet leader among Italy, Croatia, Montenegro, Greece and Turkey. Some overseas experiences in the Caribbean. Since 2012 my collaboration with AVELECAZZATE has started, first as a Skipper and assistance of the fleet at sea and on land, then from 2017 as an Instructor Teacher for Nautical licenses.